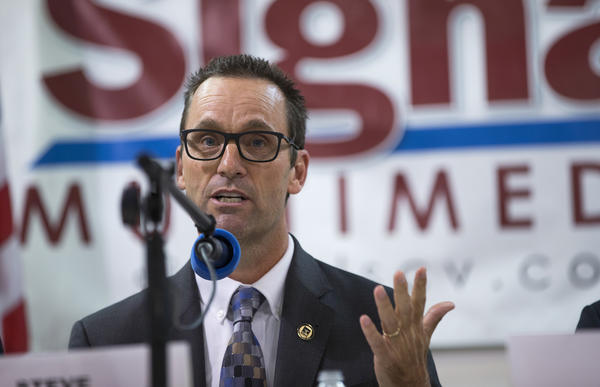 Now that Donald Trump is officially the Republican nominee for president, some down-ballot GOP candidates are being called on by their Democratic opponents to denounce his remarks after he spent the weekend trading barbs with the parents of a Muslim American soldier who died in Iraq.

Rep. Steve Knight (R-Lancaster), who is facing a tough race against Democrat Bryan Caforio in the 25th Congressional District in north Los Angeles County, was called on by Caforio “to disavow his party’s nominee’s comments immediately and without reservation.” The district is almost evenly split between Democrats and Republicans, with 21% of voters listing no party preference.

Caforio said it was “disappointing” that Knight remains “silent about Trump’s inability to serve as commander in chief while his party’s leader attacks our fallen heroes.”

“Congressman Steve Knight’s continued silence calls into question whether he can stand up for and protect families of California’s 25th,” Caforio said in a statement released Monday.

Knight, a first-term congressman and former state senator, was on the fence about Trump in May when he told The Times he was still “working on figuring out what I am going to do with the presidential race.”

With the conventions over, where does Knight stand now?

“Knight has not endorsed anyone for president. I just confirmed that,” said Knight’s political consultant Matt Rexroad.

Rexroad said that Knight has not endorsed a candidate for president in the past.

“I don’t know that he is planning to endorse anyone,” he said.

Rexroad said he had “no response” on Caforio’s call for Knight to disavow Trump.

Caforio’s campaign has also called for six debates before election day. Rexroad said Knight’s campaign is “working on the debates.”

“They certainly will be debating,” he said.

Speaking to voters who “don’t consider themselves Democrats,” Luján said:

“If your member of Congress is supporting Donald Trump instead ask yourself this: What does that say about their leadership, their character, their values?

“If they won’t even stand up to Donald Trump, what makes you think they will stand up for you and your family?” he said.