Last week at the 25th Congressional Candidate debate sponsored by the Santa Clarita Valley Signal, Knight doubled down on his anti-social security position stating, “I think Social Security was a bad idea. I do. I absolutely think it was a bad idea.” Knight’s troubling position on social security is nothing new, last year on local radio station KHTS, he expressed his disdain saying, “I’m not a big fan of Social Security, I can say that.” 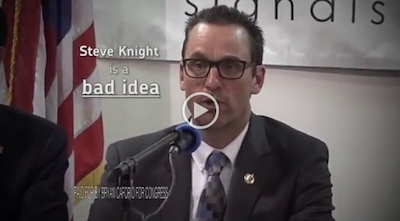 In his response, Bryan Caforio said, “Congressman Steve Knight’s belief that ‘Social Security was a bad idea’ is as troubling as it is extreme. Social Security is an earned benefit that seniors have worked for and paid into their entire lives. Social Security has kept millions of seniors citizens out of poverty, and allowed our elderly to live out their years with dignity and respect. These comments by Congressman Knight reflect a record in elected office, which has consistently put seniors at risk. Steve Knight is a bad idea for 25th District seniors.”

Caforio was born and raised in Southern California by two public school teachers, attended UCLA and Yale Law School, worked for a United States federal judge, and practices as an attorney taking on some of the world’s biggest banks. Bryan lives in Valencia with his wife Lisa, who serves as a Deputy City Attorney at the Los Angeles City Attorney’s Office.

The 25th District covers northern Los Angeles County and part of Ventura County including the Antelope Valley, Palmdale, Lancaster, Santa Clarita, and Simi Valley. President Obama won the district in 2008, and experts consider it a toss-up in a Presidential election year. Last year Democratic registration eclipsed Republican registration for the first time, and the district is now majority-minority. National Republicans list Congressman Knight as one of their most vulnerable incumbents.